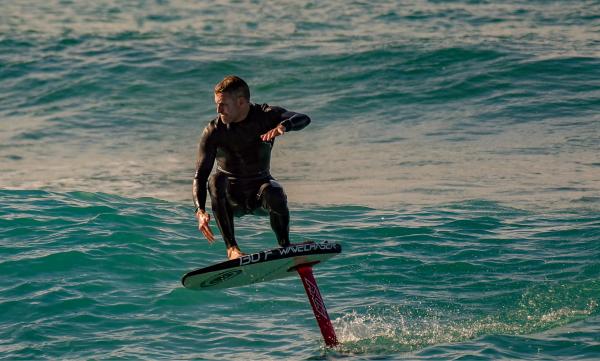 Four-time Olympic Alpine Ski Coach and current Ski & Snowboard Australia’s Alpine Director, Mick Branch is a Cronulla local and an avid surfer and paddle boarder. When Mick is not on the slopes he is at home in the water!

Mick, like the rest of us, was in awe when foiling started to take hold in Hawaii. The ability to fly on average waves away from normal line ups, even in open waters, is a game changer. Mick tends to find himself at the forefront of performance sport and he sees foiling to be an exciting new sport that is enabling surfers opportunities to explore open ocean wave riding and surf foiling away from crowds in conditions not suitable for traditional surfing.

Mick has the same goal as us at Wave Chaser, he wants to understand everything there is to know about surf and downwind foiling and aims to master his skills through the testing and development of performance watercraft.

Cronulla is endowed with a perfect range of locations for foiling, and Mick is leading the charge in testing foil craft in the area. With over 20 years of Olympic level coaching, Mick brings a wealth of experience and technical knowledge from the highest level of sport to Wave Chaser.

Back To Team Page >>